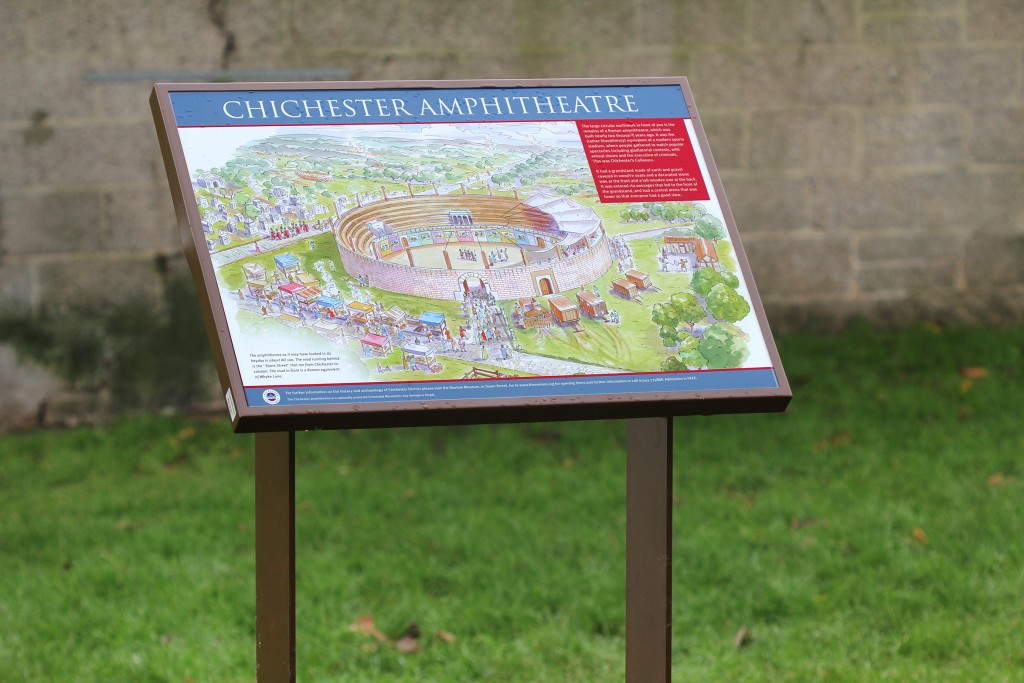 We have over the years designed and produced a range of interpretation panels for various historic sites and points of interest around Chichester. Following the very successful set of panels done for the Chichester City Walls trail, we were asked to design and produce this board for the site of the Roman Amphitheatre in Chichester.

The amphitheatre was built nearly two thousand years ago. It was the (rather bloodthirsty) equivalent of a modern sports stadium, where people gathered to watch popular spectacles including gladiatorial contests, wild animal shows and the execution of criminals. This was Chichester’s Coliseum.

The amphitheatre was discovered in 1934 and was first archaeologically investigated a year later. It was found to have a central arena that had been made by lowering the ground by about 1.2 metres, the spare earth and gravel being used to make a large bank around it that supported the wooden seats of the grandstand. There was a decorative stone wall at the front of the grandstand, between it and the arena, and probably a tall wooden one at the back. Finds indicated that the amphitheatre was constructed in the late first century AD. Recent geophysical survey has revealed that it was oval and probably had four entrances that led through the bank to the bottom of the grandstand.

The board features an illustration of amphitheatre as it may have looked in its heyday in about AD 100. The road running behind is the ‘Stane Street’ that ran from Chichester to London. The road in front is a Roman equivalent of Whyke Lane.

This entry was posted on Tuesday, December 8th, 2015 at 10:26 am by Peter Hamilton and is filed under Recent Projects. You can follow any responses to this entry through the RSS 2.0 feed.