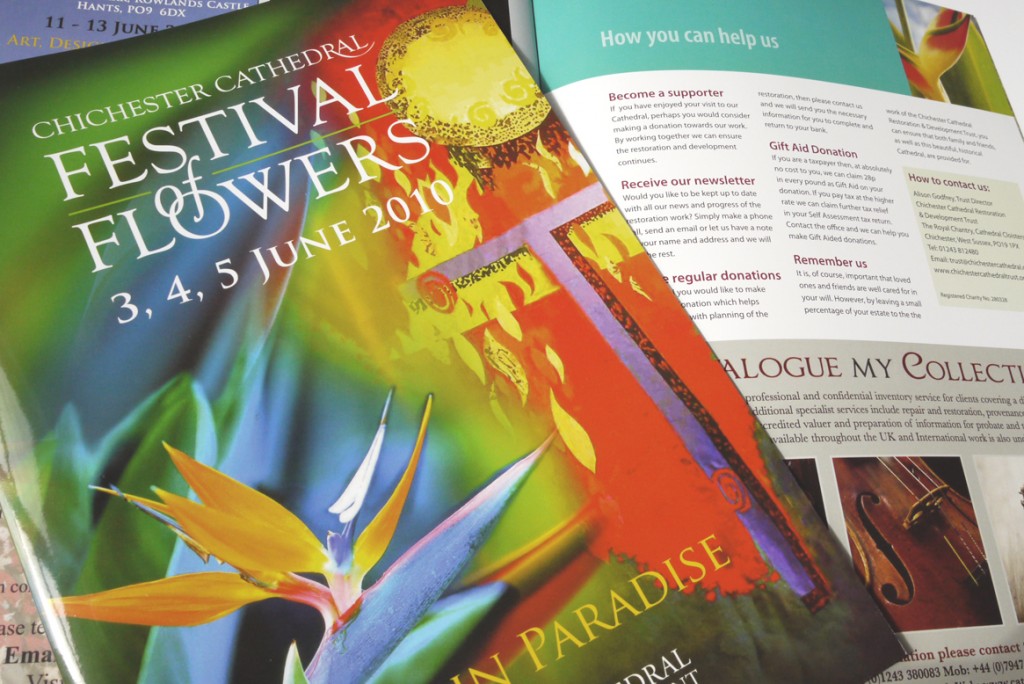 Following the hugely popular design for the Chichester Cathedral Festival of Flowers in 2010, Profile were asked to develop ideas and a finished design for the 2012 Festival. The theme for the Festival is books (Every Book Tells a story).

After following several possible design ideas for the marketing material we stumbled on the idea of making flowers made from recycled pages from relevant novels being used in the titles for the flower displays, this idea seemed to capture everyones imagination. The paper flowers featured on the main poster and publicity are recycled pages from Pilgrims Progress, the book title that was the theme for the main display in the nave. We did of course have to actually buy old copies of the novels and experiment with various techniques of flower making before finding one that worked.

Tom the designer at profile responsible for making the flowers, quickly got the hang of producing them – to the point that we considered having a stand at the festival where visitors could watch them being made, or even request personal bouquets made from particular novels that were favoured. This never actually materialised.

We have found on many design projects, this one included that there is a tendency when given a brief to start with complicated design ideas that require a lot of work in executing. The lesson from this project and others is that a good simple idea when it comes really needs little in the way of complex execution or design..the idea really does speak for itself and have an immediate impact on the end user, who, more often will understand the message far quicker than would otherwise been possible.

The other challenge when designing for an event year after year is to retain a fresh eye and not simply try to re create something that has worked previously.

This entry was posted on Thursday, August 18th, 2011 at 8:51 pm by Peter Hamilton and is filed under Recent Projects. You can follow any responses to this entry through the RSS 2.0 feed.